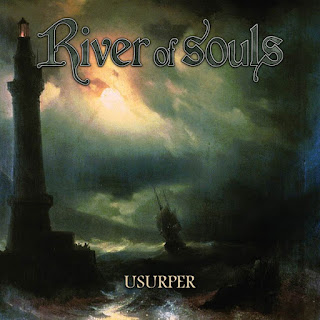 Anyone who knows me is well aware how big a fan I am of doom metal so the fact that I somehow managed to miss "The Well Of Urd", the debut album from River of Souls that was released three years ago, is a travesty given that their interpretation of doom metal is clearly, with the benefit of hindsight, something that I really should have been all over*. Thankfully history didn't repeat itself with the purchase and arrival of their second album "Usurper" which has proven to be a very welcome surprise in a year that has already been strong when it comes to doom metal.
Not having heard its predecessor, I came into "Usurper" without any preconceptions or points of reference but it really didn't take long at all to impress. That could be due to the fact that River of Souls know how to build songs around robust riffs and, while often residing in the slower tempos you would expect, their willingness to use bursts of speed together with well incorporated melodies gives life to each song and when they do decide to delve into more aggressive territory it merely heightens the impact.
Surprisingly, one of the strongest songs on "Usurper" is also the longest as the eleven minute "The Tightening" contains a series of well conceived ideas and variations that fully justify its lengthy run time. Not that any of the songs around it are flawed, though the three minute "Fateweaver" feels slightly out of place, but it is telling that River of Souls can push themselves to such lengths and come away with something that not only retains interest but actually captures it completely.
Ultimately "Usurper" succeeds due to its attention to detail and the strength of their song writing that generally stays true to the mainstays of doom metal but adds enough of their own personality to give it some sense of a unique identity. As a (tragic) devotee of the genre it ticks all the necessary boxes while demonstrating that River of Souls are yet another talented proponent of this hallowed style and, in a clear case of better late than never, they will certainly be a band that I will continue to keep an eye on in the future as it is clear that they are capable of great things.
(*Said oversight has now been rectified)
https://www.riverofsouls.nl/
https://www.facebook.com/riverofsoulsband/
Posted by Peter Schulz at 12:43 PM